Our next Trading Card Spotlight features Corey Sawyer, who currently is displayed on card number 853, from the Superstars of 2014 Collection. Corey is also on trading card number 956. Corey is such a fan of online role-playing games but has also a huge excitement for classic arcade games. He is one of the founding players in the first arcade tournament at World famous arcade Fun Spot in New Hampshire. Corey also holds world records on certain games such as the arcade game Soul Calibur.

What are your current world records on arcade machines?

I don’t know all of my records off the top of my head, but the one I’m most known for is my Soul Calibur completion time. I beat the arcade machine in 1 min and 33 seconds with Sophitia.

Do you learn anything from playing arcade games?

Sure, the classic arcade games teach your patience and timing, some even rely on some fundamental math skills. Many modern arcade games are sort of empty by comparison, but there are a few great ones out there. Arcade driving simulators for example require a fair amount of reflex action and concentration to master.

Oh wow, that’s going back a bit. There was a gas station/convenience store right across from the elementary school that I went to, and they had a couple of arcade machines out front. I remember going in there before school and getting a couple games in. I don’t remember which machines they had; I just remember being late for the morning bell a few times. The first one I remember playing was a Pac Man machine at Pizza Hut. Mostly, I remember watching my older brother play. The look of determination when he would move around the board and the joy and relief of seeing that last power pellet disappear made me very curious.

What are your opinions about today’s generation of arcade games?  How do you compare them to older, classic games?

There’s a lot to love about today’s arcade games, but they can’t hold a candle to the amount of skill needed on the arcade games from the 80’s. I love the intensity of the current arcade games and the artistic style though.

What is your favorite portable gaming device and why?

I don’t use portable devices very often, but when I do I enjoy the Nintendo Switch. It has a great library of old and new games. I’m a sucker for a good Mario game.

What games today do you play and what are your favorite genres of games?

I spend most of my game time playing Destiny 2 these days, it’s a great mix of first-person shooters and MMORPG’s. Those are my 2 favorite genres these days. 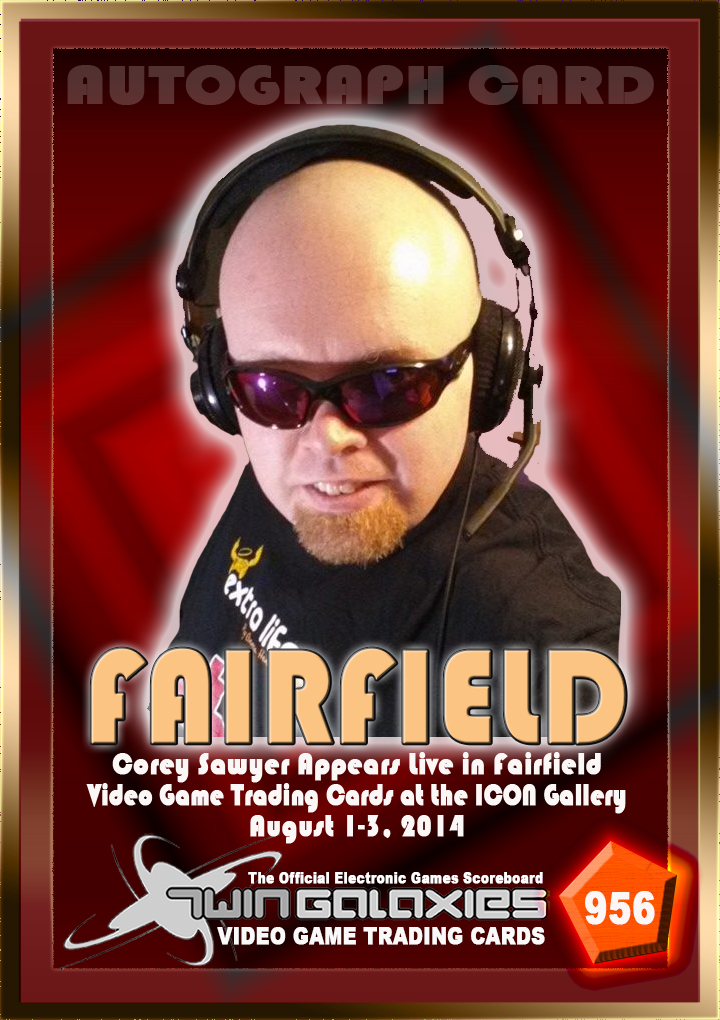 If you could only have one arcade game or pinball game, what would it be and why?

I think I’d want an original Soul Calibur machine. That was the machine that I got my first world record on, and I’d love to have one in my house so I could try to beat my own score.

Do you believe some arcade games are too violent and lead to violence in America today?

No, either you’re a violent person that can’t control their tendencies or you’re not. A game won’t change that.

Do you prefer playing arcade games alone, against friends and why?

Playing against friends is fun. Nothing like a bit of healthy competition.

Did you ever think when you were younger you would be on a video game trading card?

No, I had never dreamed of such a thing. I still flash mine around from time to time.

Have you ever received any media coverage for your appearance on the trading card?  If so, where?

I don’t recall getting any sort of media attention for it outside of the autograph signing in Fairfield, Iowa.

Which company makes the best MMO games and why?

That’s a real “Sophie’s Choice” right there. It’s a hard choice, and I do love Bungie for their storytelling, but I think I’d have to give the crown to Square Enix. Final Fantasy 14 is a masterpiece and it’s still going strong.

Oh yes, 100%. It doesn’t qualify as an arcade, but my PC is my go-to stress reliever. If I have a rough day at work, I turn to Destiny 2 and relieve some aggression.

Who is your favorite arcade game character and what makes that character special?

Hmmm I think I’d have to say Sonic the Hedgehog. I spent many hours as a kid playing those games with friends. Mega Man is a close second.

What springs to mind when you hear the word ‘arcade?

The first thing that comes to mind is the sound of the machines. The sound of the music attracting you to the machine, the ‘plink’ of the tokens going in the slot, and that strange yet not unpleasant musty odor like an attic. Smells like history.

When did you first meet Walter Day and where was it at?

I first met Walter at the very first Twin Galaxies Tournament at Funspot in Weirs Beach. Ken Sweet and I arranged the first tournament, and it became a huge event in the classic gaming scene. It was incredible to see how big it actually became. I was intimidated to meet Walter at first, the man is an icon after all, but he was quick to turn that around. He has been a great friend ever since.

If you could describe Walter in one word, what would that word be and why?

One word? I think that’d have to be water. I know, it’s a weird answer, but let me explain. Water is soft, but unyielding. It has the power to push through obstacles, but also the pliability to go around them and find a new path to the same goal. Walter is a force of nature that leaves his mark on the hearts and minds of everyone that is lucky enough to spend time with him.

What is your favorite arcade game of all time?

This one took some serious thought, but I think I’d have to say Tron. I’m absolutely terrible at it, but I love it just the same.

If you can design your own game, what would it be about and who would be the main character?

I think I’d want to do an RPG. I’ve done some writing over the years, so I’m a sucker for a good, immersive plot line. I have a story I’ve been whittling away at for years called Twitch. It’s a space epic where the main character can manipulate matter. He was originally a mindless weapon that was liberated by a resistance group that never expected to see a human component within the machine. I think I’d want to see that made into a game.

Where do you see arcade games in the next 15 years?

I think VR is going to dominate the arcade space within the next 15 years.