This is the review of the RDP RetroDuo Portable V.2.0 handheld system.   This is a fairly new item that has been on the market less than a year.    I have purchased this item with the excitement of playing the original classic Nintendo and Super Nintendo games on a portable handheld device.

There are many recycled versions of classic Nintendo and Sega games on Gameboy, Wii U Shop, Xbox Live, PlayStation Network and MAME, but to me there is nothing like playing the original cartridge that was played back in the 1980s and 1990s.  I do own the systems and controllers from back in the day but most of the time they are stored away or unplugged.   With this new portable device it’s easy to turn on the classics and play them anywhere.  There is no TV required.  When I first saw this item online, I immediately got excited and had a vision of myself playing The Legend of Zelda in my backyard on the deck or in the bedroom at night with headphones so no one was disturbed.

The time came to order this ultimate handheld device and when it was time to checkout it was SOLD OUT everywhere.   It was indeed the hot item of the year.   I had to wait around 3 months for it to be back in stock and immediately placed the order.   It finally came and I was ready to begin the experience.   Overall there are many positives and negatives of this device.  I will explain and go into details.

First impression out of the box was good.  The size of the unit is not too big and no too small.  The screen size is about what you would need and expect on a hand held portable.   Some of the previous Gameboy systems had small screens which made gaming hard and bad on the eyes.   The standard + direction pad was just the way it used to be on the old NES controllers.   The buttons were what you normally would see on a SNES controller with the A, B, X, Y layout.   Certain NES games took some getting used to on that layout.   The Volume control is easily accessible on the bottom of the unit and there is a headphone jack as well for standard headphone use.   The Power switch is at a good spot on the side of the unit so it’s not in the way when holding it and moving around with the control pad.    The charge on the unit is very good in my opinion.   I fully charged it when I received it for about 6 hours and it lasted me almost a week of play.  I would say a good 8 to 10 hours of play total. 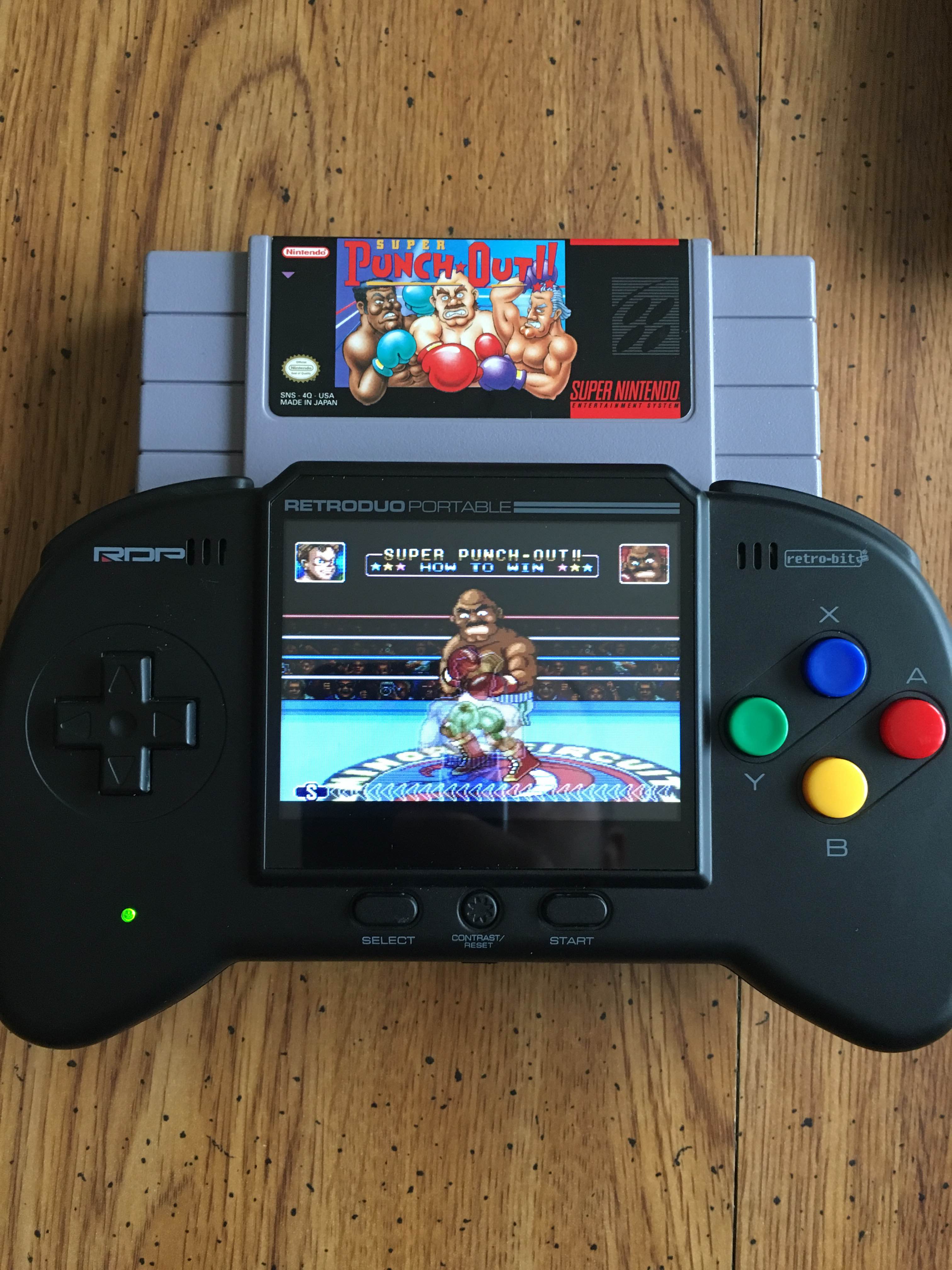 The games itself are inserted directly into the unit.  A firm fit makes the game work every time with no need to keep the unit still so the game stays in.    The one negative about the game insertion is the NES cartridges.   For SNES games, they directly go into the unit with no adapter needed.    The NES games on the other hand need a special Retro Duo Port that does come with the system in the box.    The problem is the port is almost as big if not bigger than the NES cartridge.  After putting the NES cartridge into the port, you then insert both into the Retro Duo system.   When all said and done the system looks like a huge long clunky handheld system you may see back in the 80s as prototype portables.   I was expecting the NES to be a little bit quirky looking as they are large cartridges going into a portable system, but I never expected another large port extending out as well as the NES game.   This makes it a little less “portable”.     There is also an extra DuoPort that can play Sega Genesis games on the RetroDuo, this item is sold separately, (the Genesis DuoPort will also let you play the Genesis games on a SNES system, but not sure why you would ever need or want to do that). 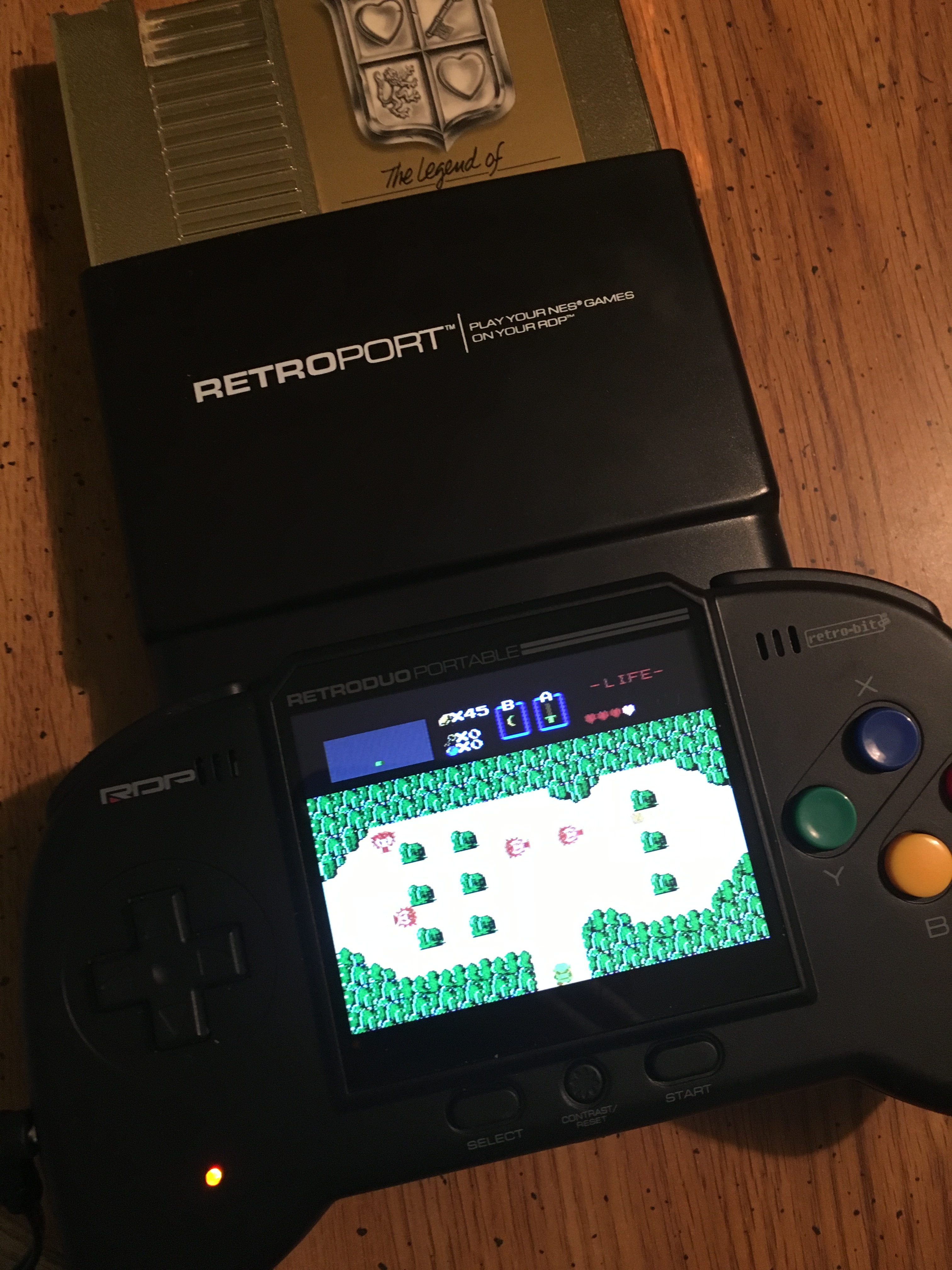 The visuals are average at best in my opinion.   It does bring back the old memories of the original graphics, but on certain games it does not enhance the colors like a TV or an emulated version would do on a Gameboy.   There are times that the graphics at the top of the screen will not catch up to the movement and looks choppy while scrolling on the screen.

The Sound from the system itself is again not what I expected.   There are some games where the sound is muffled and digitalized.   The sounds effects in the 80s and 90s were not as they are today, but hearing the original sounds from a cartridge game are what makes the experience true.   I think the company could have done a better job with that.

One other item that to me is frustrating is the way to take out a NES cartridge form the DuoPort.   The port itself comes out and goes in smoothly into the game unit, but the NES games coming out of the port take a lot of effort.   Almost every time I take a game out I feel like I am going to break either the game or the port.   It’s not very smooth at all.  I understand the game needs to be secure and tight to make it work but it may be too tight and too secure. 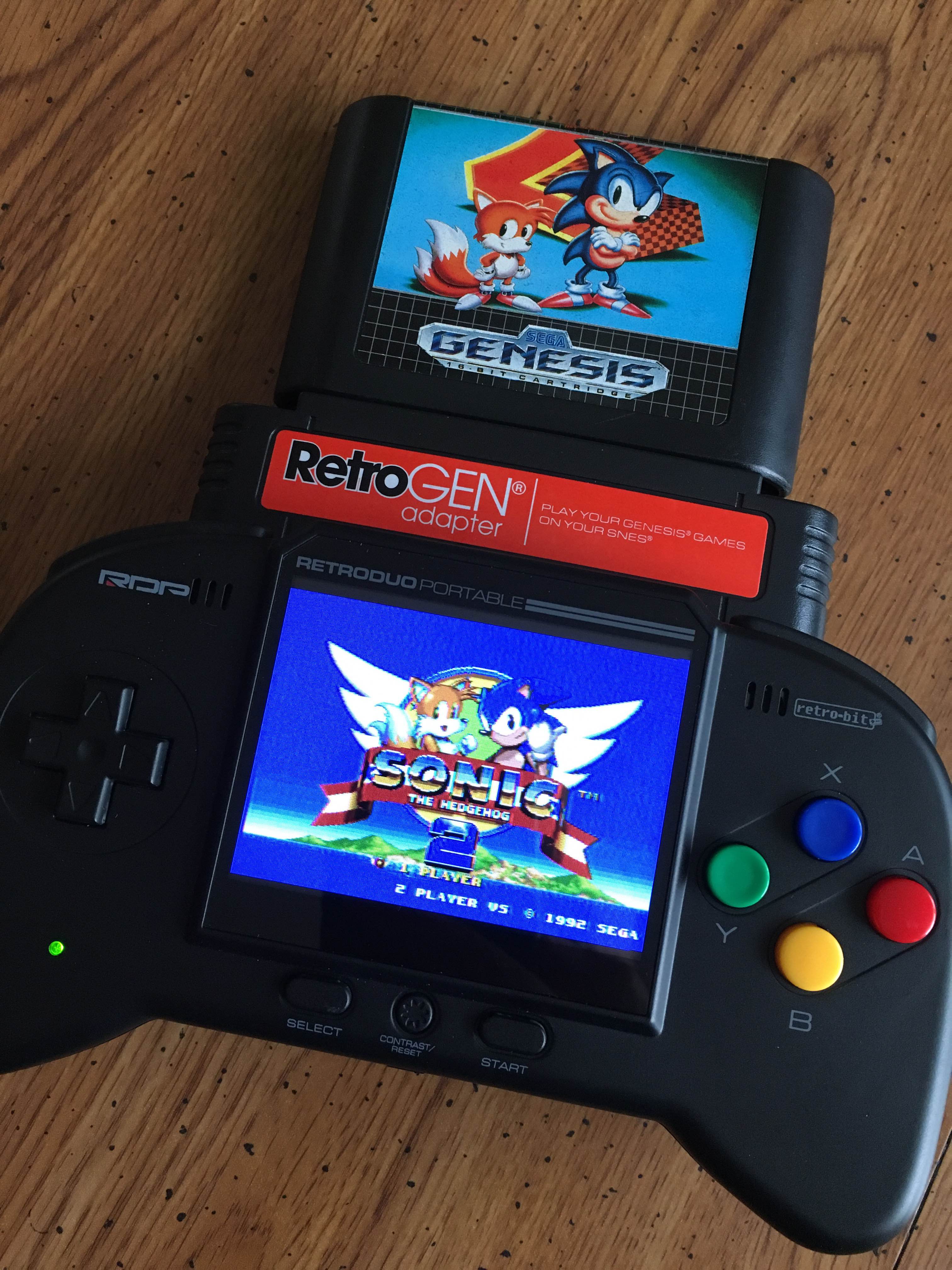 There are many positives to the unit as I explained.    The idea of grabbing an NES , SNES or Genesis game off the shelf and being able to play anywhere ,  without hooking up the system to a TV, is very convenient .   There is even an extender piece that comes with the RetroDuo Portable that will allow you to use your original NES and SNES controllers to play on the screen if you wish.    This would ensure true original gameplay.   The Battery life is much better than I expected and it really makes you not have to worry about playing a long ended game which does not have saving points.    Fully charged system will let you play endless hours without having to plug it in.  The system itself is lightweight and even with the DuoPort attached with an NES game, it is manageable to carry and not strain your arms or hands.

Overall I recommend this item for any old school gamer.   It is definitely worth the $79.99 price and can be found at amazon.com.